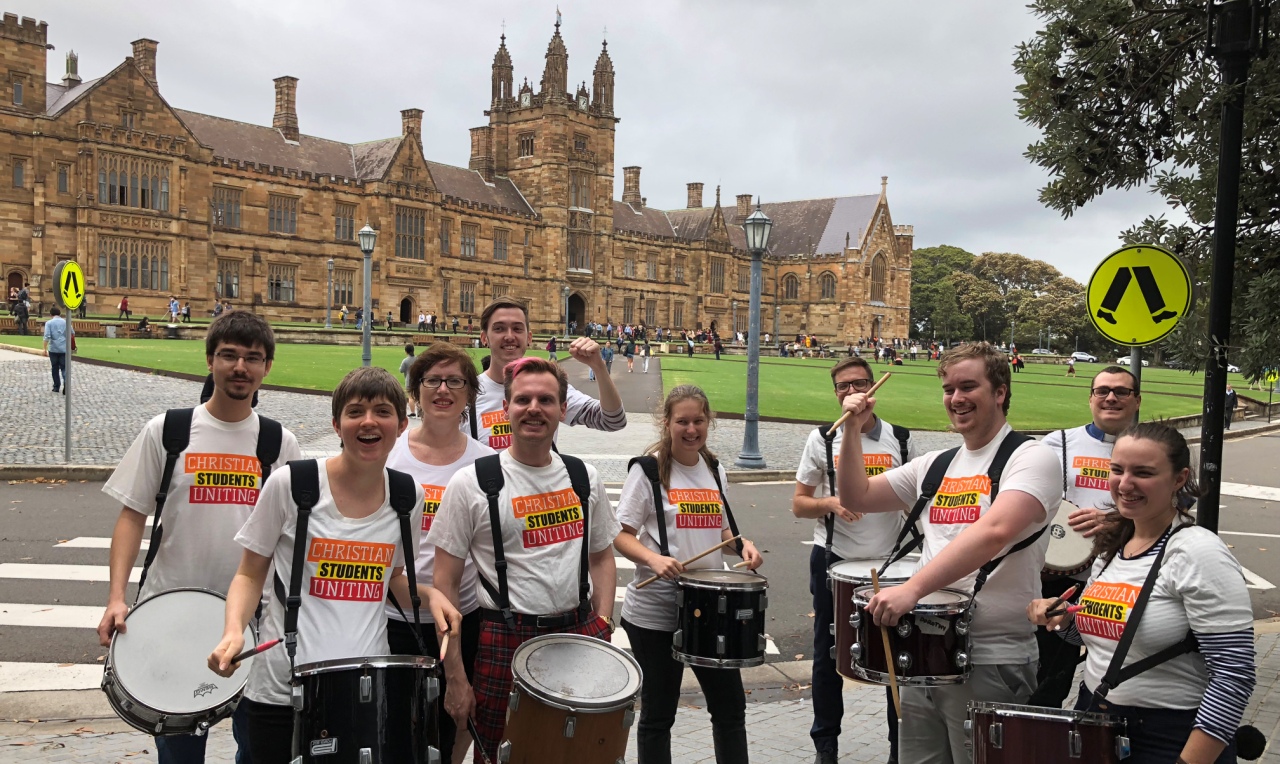 On 21 March, members and friends of Christian Students Uniting took part in the Books Not Bombs rally at Sydney University. The rally was aimed at raising awareness regarding funding cuts to education by the federal government, who are also looking to increase military production and spending.

The contingent from CSU made quite an impact, playing drums and providing some important energy to the rally. CSU was also well represented by Nico Tjoelker, vice-president of CSU at USYD, who spoke at the rally: 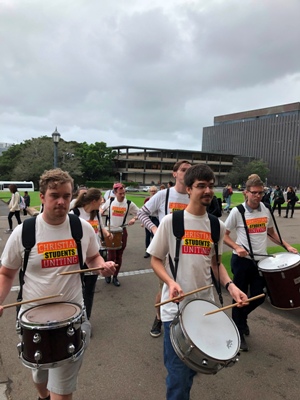 Good afternoon. My name is Nico Tjoelker, and I am representing Christian Students Uniting.

We acknowledge that this land belongs to the Gadigal people of the Eora Nation.

Students and allies: Malcolm Turnbull spat in the faces of students last December when he decided to cut a staggering $2.2 Billion from education. Our government has decided to put Australia’s future on the shelf, and instead put weapons of war in the hands of millions of people across the globe. For profit.

At Christian Students Uniting, this contradicts the very fiber of our being. We are followers of Christ – a force for good and radical change, and we stand in solidarity with you. Rain hasn’t stopped us in the past, and it certainly won’t stop us now. We are here because we follow Jesus’ example as a peacemaker, a teacher, and an advocate for the oppressed. 2000 years ago, Jesus himself was executed by a militaristic state on a cross in the town’s garbage dump.

Christian Students Uniting believe education, critical thought, and scholarship are crucially important, and we meet several times a week to learn about our own sacred texts. Through our faith, we respond with action for refugees, for women’s rights, and for our allies in the queer community.

The most famous Christian activist of the last century, the Rev. Dr. Martin Luther King Jr., once said “We live in a world of guided missiles and misguided men.” Today, that misguided man is Malcolm Turnbull.

Students and allies: We, Christian Students Uniting, are proud to stand among you in our pursuit of liberty and justice for all. Thank you.

To watch a video of the speech, click here.

To read the Insights article about the rally, click here.

To read the Honi Soit article about the rally, click here.